Heads up, there may be some changes to remote area tax concessions and payments. The Productivity Commission has suggested reforms.

The Productivity Commission has called for significant reforms to the tax concessions and payments to residents and businesses in remote Australia, so they are better targeted and fairer.

The Commission was asked to review three longstanding tax concessions and payments:

Public submissions in relation to the draft are due by Friday the 11th of October. The final report is expected to be handed to the Government in February 2020.

Some key points from the draft report

The Commission recommended the abolition of the ZTO, on the basis it was an ‘ineffective and blunt instrument’. The Commissioners note that some areas that remain eligible for the ZTO are no longer isolated.

The impact from the abolition of ZTO, based on the current annual base rates, are:

The relevant loss increases if there are dependents.

The Commission recommends that areas eligible for RAA should be aligned with Australian Bureau of Statistics remoteness classification. The impact of realignment would mean that recipients in Darwin who are currently eligible for the RAA would no longer be eligible, while places such as Wilcannia, Longreach, the Yorke Peninsula and Tasmania’s Central Highlands that were previously excluded will now be brought into the RAA area.

The Commission has also recommended that the RAA payment rates be reset, ideally to take into account both inflation and to compensate for higher living costs in remote and very remote areas. Currently, the RAA rates are not indexed (unlike associated income support payments). Arguably, under this recommendation, recipients who currently qualify for a RAA and continue to qualify under the proposal may be in a better financial position.

The Commission found that current fringe benefit tax remote area concessions are often not well targeted. The proposed changes are set out at Table 2 of the draft report and which is reproduced below. 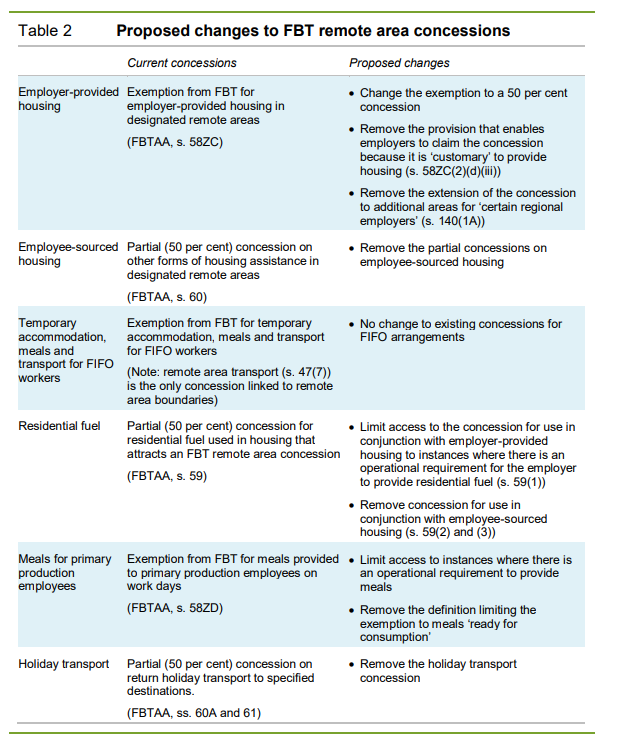 The broader impacts of the proposed changes to the FBT remote area concessions are:

We understand that many TaxEd members have staff who are located in remote areas of Australia and some of the proposed FBT changes will have a significant impact.   We encourage members to refer to the draft report in detail. Adversely affected members should consider lodging a submission in relation to the draft report or might like to consider other advocacy action.

The draft report and further details can be found at the following link:

Scroll back to top